The End of the World…again 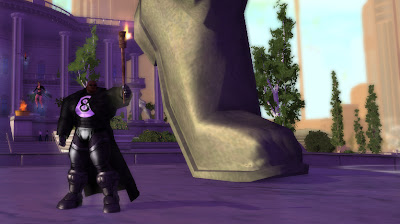 Yes, that’s right, the world is ending, one more time. It was just over a year ago that I made this post about Star Wars Galaxies (SWG) shutting down its servers after eight years of letting players live out their dreams in a galaxy far, far away. This time the apocalyptic event is occurring to the “City of Heroes”.

Like SWG, I spent a good deal of time in the virtual world, joining both games while they were still in beta testing. In fact, the kind people of Paragon City, home to the City of Heroes, were nice enough to inform me that my first, and highest level character Ipo has spent a total of 3,333 hours fighting crime and saving the world. And that is exclusively HIS time in the game, not to mention the two or three dozen other characters I’ve played.


Yes, that’s two or three DOZEN characters created in this virtual world. Some tried to save the world, others attempted to dominate it. Needless to say, I saw a lot of Paragon City. I’m proud to say I had the one-and-only “Santa Claus” character on the Justice server which was always a lot of fun around Christmas time.

I would consider Ipo, my “main” character, if I had to name one. I played him so much that when Halloween rolled around and we asked Connor what he wanted to be for Halloween he replied, “Ipo”. So Danielle put together a tiny Ipo costume just for him. Making him our family’s first cosplayer.
Oh and a friendly word of advice about making costumes….iron-ons and stretchy rayon don’t mix…they melt.

Anyhow, oddly enough, thanks to the many contests CoH held it was another character that I became known for, 8 Baller.

Eight was one of my earlier characters but his story wasn’t really fleshed out until CoH held a fan site contest. That’s when I created Heroes Central and I used some of my characters to showcase the different playable archetypes the game offered. 8 Baller was a Tanker.

Eight would go on to be featured in the comic book contest, and the machinima contest, and it was his name that I adopted on the community forums.  For a while, I even signed illustrations that I created for members of the community with an “8”.

Before it was all over, he even got his own webpage to chronicle his adventures.

With his help (and a lot of luck), we won each of those contests and a whole bunch of prizes including an iPod, an awesome sound card, a gaming video card, a PS3, an xbox 360, a DS, more copies of the game than I knew what to do with, and as Bob Barker would say, “A brand new caaaaaaar!”, which I drive proudly today.

I’m pretty sure with all the “free game time” that I won, that I spent more time in the game for free than I actually paid for. I definitely came out way ahead in my City of Heroes investment.

But the best things I got from the game weren’t things you could win. They're much more intangible. The ability to create “dynamic duos” with Katie and Connor and run adventures fighting evil; Seeing Danielle’s alter ego “Photochick” in superhero form; Rediscovering the fun of digital painting. Those are the true prizes that I received from  Paragon City and it’s heroes. Not to mention being a part of one of the best gaming communities I’ve ever seen and meeting some really great and talented people.

So here’s to the good; Ipo, 8 Baller, 3ve, Michael Angleo, Super Kate, Spirit Samurai, Vektor Prime, Klank, Star Watcher, Photochick. The bad; Sinder, 8 Brawler, Nurd, Nightshade, Yellow Jasmine, Myme, Insaniac, and all the others that are simply too many to list.

In nine days Paragon City will come to a close. And although they’ve done it countless times before, this is one time when the heroes won’t be able to save the world.
Posted by toddworld at 9:53 PM

Here's to hoping the miracle happens, and somehow City Of Heroes is pulled from the flames that NCSOFT is tossing it into.

Yeah, it was a sad day. I was there at 2am in the morning when they turned the servers off.

With all the people that were there at the end, I still can't make the decision to shut it down make any sense.