Once Upon a Time, in a galaxy far, far away…

It was eight and a half years ago that I first logged into Star Wars Galaxies and created my first character Raelin Torthal. Raelin was an African-American in his early 50’s. He was  a crafter, a weaponsmith to be exact. Most people simply called him “Rae”. 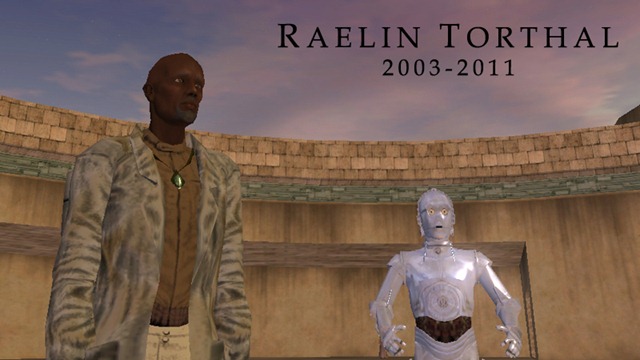 Only a few months after Star Wars Galaxies (SWG) launched, I was laid-off from my job at Donruss. I’d never been laid-off before, and I’d never been without a job for more than 2 weeks since I was out of college, so at the time I wasn’t too worried about finding a new job.

But in 2003, I’d soon find out that it was hard to get a job, very hard. I spent almost a year looking for a job and trying to get at least an interview. I wasn’t very successful. I spent much of that year sitting at my computer playing SWG in between searching job postings and waiting for anyone to call.

All that time Rae didn’t have any trouble at all “finding a job” people were always wanting new weapons and Rae was always there to supply them. He didn’t do a lot of fighting, most days consisted of prospecting for chemicals and weapons, dropping down a harvester or two if anything popped up, and paying maintenance on harvesters that were already hard at work. After that he’d tend to his factories and visit the shop to see what had sold the previous day and what needed to be restocked.

Often people would drop by the store with a '”special” order or possibly a weapon to be repaired or replaced. This was the typical day-in-the-life of a master weaponsmith.

It wasn’t long before Rae joined a very active guild and settled down in their city. It was a huge city, very popular, very busy which meant there was now even more to be done.

Being unemployed for months on end, with hardly any interviews tends to make several feelings grow inside. Feelings of helplessness, feeling worthlessness, and commonly feelings of complete and total failure.

While some may argue if I had spent more time pounding the pavement and less time playing SWG maybe I could have found a job sooner. I disagree with that logic…with my skillset at the time and the job market at the time. In fact I think in some ways retreating to that virtual world, and taking on the persona of Rae actually helped me counter those feelings of failure, and worthlessness. In the world of SWG, I was needed, almost 24/7. I did interact with other people, many in the guild were in the same situation I was in jobwise. Often we would chat about upcoming job interviews and other affects of being unemployed.

As time passed, and I got to know these other individuals, we would go on adventures or hang out in the local in-game cantina. We would talk about our families, our holiday plans, and of course, then game. The point is, the conversations we had, the places we went became very ‘real’ to me. These were, after all, ‘real’ people. And the places were still ‘real’ locations they were even measured in longitude and latitude. The only difference is the places were in a computer server somewhere.

Looking back now, I think that Rae, and the world he was in, helped me get though one of the toughest times in my life. Which is why on Dec 15, a couple of days ago, I actually felt a very distinct ‘sadness’ when they turned off the SWG servers for the last time.

Even though I’d stopped playing SWG years ago, there was still that lingering bit of ‘real’ that I felt about Rae and his world. It’s a little like having a favorite vacation spot and then learning that it’s going away and you’ll never be able to visit it again.

So, I did what I think most people would do in that case. I visited the world one last time, took a bunch of photographs, visited some of my more memorable spots and wondered if I was going to be standing all alone when the lights went out. The server was a ghost town and I had only seen two or three people running around in the first half hour I was there. I hadn’t really spent any amount of time in the world in two or three years so it wasn’t a surprise that none of my old friends were online.

I decided to head over to the ‘party event’, a party with Jabba the Hutt and friends at the Sarlacc pit on Tattoine. Much to my surprise I had just gotten to the event when one of those old friends, Yod, sent me a message saying goodbye. We chatted briefly and he said he was headed to the party as well.

“Party” is a pretty loose term. There were 5 or 6 people at the “party”. Not long after Yod arrived at the party another friend “Aff” logged on. He soon joined us and the three of us, the three crafters from the guild and the city, watched as Tatooine’s twin suns rose in the East and the servers gave their final countdown.

And with the sunrise came the end. So I have to say “So long Rae. It was a heck of an adventure.”
Posted by toddworld at 12:59 AM