"What is that thing in your logo?" 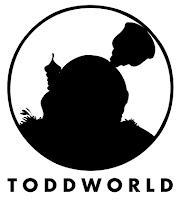 2016 will mark the 20 year anniversary of ToddWorld. 20 years...ON THE WEB! While I await for some historical organization to send me my virtual historical marker plaque to celebrate the special occasion, I figured I'd address a question I often get.

"What is that thing in your logo?"

Honestly, from the standpoint of a graphic designer, it's probably a question you don't want frequently asked. I mean, if you have to visually explain your logo, then you probably did something wrong. And yet...here we are.

When I was first designing ToddWorld, I wanted it to be different somehow. I didn't want to create a website like all the others. The concept I locked onto was that of a children's illustrated storybook. You know, the kind with a large image followed by a single line of story, then turn the page. I decided I would create a website that scrolled horizontally (sideways), instead of up and down.

I drew a bunch of illustrations of locations like a movie theater, a rocket launchpad, a weird art gallery, and a laboratory.

At that time, the ToddWorld logo was simply a logotype, a handwritten set of letters I had created. But the more I worked on the original site, the more the idea of a laboratory clicked with me. I'm always experimenting and trying out new things. I liked the scientific implications that it suggested while at the same time the illustration has this huge, looney toons telescope jutting out of one side, pointing toward the sky. The lab is about being brave enough to try something different. It's about looking at the details with a microscope, or looking to the future with a telescope.

When it was time to roll out a new design for ToddWorld, I'd decided to go a different direction with the site, but I still wanted to keep some piece of the style from the original site. The choice of what to keep was pretty easy, the laboratory would move on while the launchpad, the gallery, and the movie theater would become history. 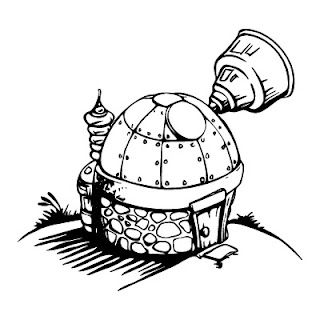 Since then, the laboratory and the logo have gone through a number of iterations. Some with color, others without. I've even created "Seasonal" versions for the holidays and such.

At one point I was even asked by David Copperfield if he could take the logo and use it as a logo for his secret magic museum. While I was flattered, and appreciated the question I recommended that there may be something better out there to serve as the logo. 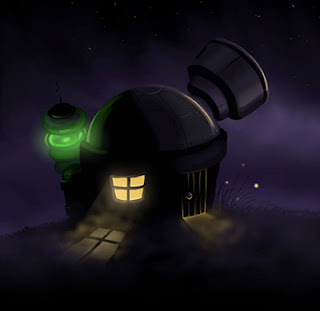 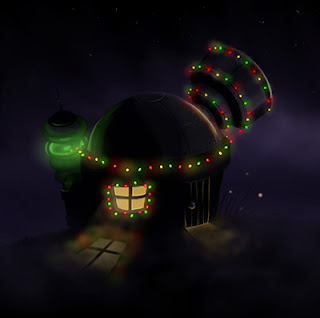 These days the color and the detailed line art of the original lab are all gone. All that's left is the silhouette of the lab itself. 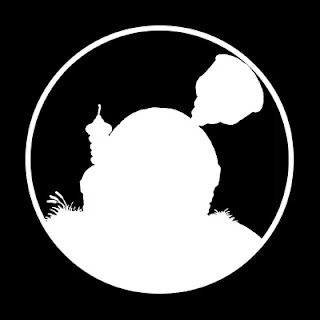 And while it's easy to argue that just the silhouette is not a clear mark or that it's not easy to identify, it does seem to represent me just fine.

So there you have it, that's how the ToddWorld logo evolved. Is it perfect? No, far from it, much like me.
Posted by toddworld at 10:52 PM